Jobs resigned as the CEO of Apple last month, due to his health. In 2004, he was diagnosed as having a cancerous tumor in his pancreas, and two years ago he had a liver transplant. In his letter of resignation, he wrote that he felt he could “no longer meet [his] duties and expectations as Apple’s CEO.” 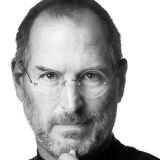 Apple has been in the news this week after the launch of the iPhone 4S, which was introduced to the public just yesterday.

Jobs has three children with his wife, Laurene Powell, two daughters and a son. He also has a daughter from a relationship he had with Chrisann Brennan. Steve Jobs was 56 years old.