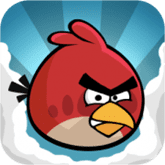 Apple released their list of the top 10 Paid iPhone apps for 2012 and there are some familiar faces and a few surprises.

2012 was obviously the year of the Angry Bird on the iPhone. There are three apps from Rovio Entertainment in the top ten – the original Angry Birds at #8, Angry Birds Star Wars at #6 and Angry Birds Space at #1. What a year to be an unhappy avian.

The #2 app is not a game, surprisingly. It’s an app called WhatsApp Messenger and it’s a cross-platform smartphone instant messaging app. With the explosion of smartphones in the cellular phone world, perhaps it’s not that big of a surprise.

Most of the top 10 paid iPhone apps for 2012 are games. Apple rounds out the game list with #3 Draw Something, Disney’s entry at #5 – Where’s My Water, Fruit Ninja at #8, and the popular crossovers from the PC era, Bejeweled at #9 and Tetris at #10.

Draw Something is a drawing game where you draw a picture on your phone and whoever you’re playing with has to guess the word it represents.

Where’s My Water is a 400-level, kid-friendly physics-based puzzler. It has gotten several Game of the Year awards.

Fruit Ninja is an action game with fruit as the weapon. Squish, splat and explode fruit to gain levels. It’s another kid-friendly app.

Bejeweled and Tetris are the old PC favorite puzzle games that pit the player in a race against time (or untimed levels depending on your preference).

The only other non-game app in the top 10 besides WhatsApp is Camera+, an enhanced camera app that has more functionality than the plain old built-in camera.

When you look at the top 10 paid iPhone apps for 2012, it sure looks like the Apple iPhone is the top gaming platform out there!

What is your favorite iPhone app? Let me know in the comments below!