As of today, the new ASUS Transformer TF300 tablet is on sale. Or as least, that’s what ‘they’ say. 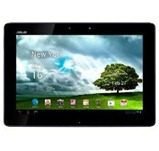 So what’s the difference? Well, about $100. The new TF300 will run a shopper back about $380 (base price). The Prime runs about $500. For the savings trade off, shoppers will get a slightly heavier tablet with the TF300 (about 1/10 of a pound more).. The body is plastic rather than metal, and is somewhat thicker. And there’s a bit less processing power in the Transformer TF300, but not by much.

The $380 model has 16 GB of storage. There’s also a 32 GB version available for $400. In case you’re considering getting a TF300 and using it with a Transformer Prime keyboard dock, ASUS says they won’t be compatible.

What’s going on with the launch here? Post your thoughts below.