With so many things featured in the new Entertainment Weekly, it’s not surprising that Captain America makes an appearance.

Next week at Comic-Con, Marvel Studios will feature the next film on The First Avenger, Captain America: The Winter Soldier.

The movie is scheduled to hit theaters next spring, but the film’s marketing is already underway. We saw when the first poster arrive a few days ago.

The magazine features new concept art on the film. The images have Captain America taking on The Winter Soldier.

Aside from that, the movie promises action. The story behind Captain America and Winter Soldier seems to be related to warfare, with ships firing from the sky and even The Falcon makes an appearance in the image. It certainly shows that fans might be in for one thrilling ride.

The Winter Soldier sees Steve Rogers dawn his shield once more. This time, the mission will get personal as the enemy he faces is someone from his past.

We’ll certainly have more info soon – the latest Marvel film will be a main feature next week at Comic-Con.

Here is the new concept art: 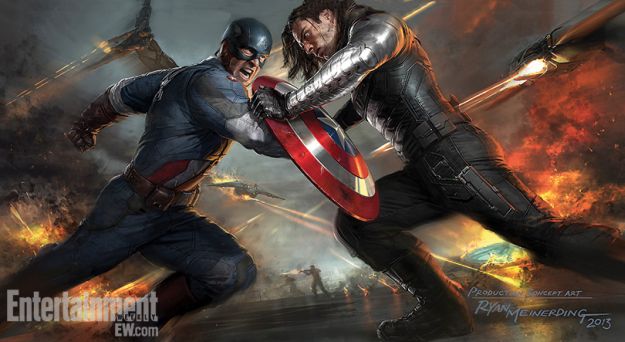