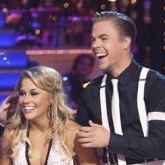 According to judge Len Goodman, last night’s episode of Dancing with the Stars included the best routines he’d ever seen.

Which means, like it or not, good dancers are going home.

Tonight’s results show kicked  off with an encore by Shawn and Derek then it was on to the first results. Gilles and Peta, Melissa and Tony, and Emmitt and Cheryl all made it through, but Kirstie and Max landed under the red light.

After a break for a few commercials, Frankie Moreno wowed the crowd with his Las Vegas lounge sound.  Former contestant Kyle Massey and partner Lacey Schwimmer performed along with the dance troupe, making the whole number even hotter.

The second round of results left Kelly and Val in the clear along with Derek and Shawn and Apolo and Karina. Drew and Anna landed in jeopardy again. Drew thought he deserved higher marks, but apparently the audience agreed with the judges and he was eliminated.

To make things more exciting in this tight season, DWTS added a twist. Each couple had to choose a dance style for another couple. Choices included non-ballroom dances such as hip-hop, Bollywood and contemporary, which meant they had to pick their dances strategically.

Some chose the most difficult dance for their competitor, while others chose to hand off dances that they themselves didn’t want. Ten dances were assigned, but only nine will be performed since it’s a double elimination night.

The AT&T spotlight performance featured a young man from New York who financed his college education by tap dancing on subway platforms for donations.  Joshua Johnson wowed the crowd with his urban spin on classic tap. Then expressive singing duo Carmen pumped up the ballroom before the final elimination.

In the final round, Sabrina and Louie made it through, along with, surprisingly, Bristol and Mark. That meant it was the last dance for  Helio and Chelsie. Quite a shock.

Dancing with the Stars returns Monday, October 15 and it will be like nothing they’ve ever done before, as the couples take on the Charleston, Disco, the Bolero and more. Who will falter? We’ll all know this time next week.