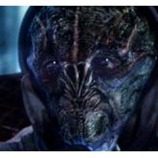 Fans of TNT’s Falling Skies were treated to a spectacular second season finale of the popular sci-fi show. It’s going to be a long wait until the beginning of season three – 8 months!

The season ender, titled “A More Perfect Union,” started off blandly enough. The military coop went smoothly, though Tom threw an unexpected wrench in when he would not go along with the plan. But that was quickly lost to the developing story line as Skitters invaded the facility. The standoff was resolved by the 2nd Mass putting themselves in the line of fire – protecting the Skitters, which turn out to be rebels fighting against the Fishhead Overlords.

The 2nd Mass ends up tasked with acting on intel provided by the rebel Skitters. Unbeknownst to our heroes though, their Commanding Officer, General Bressler, goes behind their backs and sends out a hit squad to take out the rebel Skitters. Is he helping the Overlords, or just that much of a Skitter hater (he later reveals he watched Skitters kill his son)?

The 2nd Mass goes on the mission without the help of the rebels – but it’s a trap. Dai is killed in the melee that ensues. Then, hanging by tentacles, members of the 2nd Mass are tortured, and it’s revealed to Tom that Anne is pregnant with his child.

Soon thereafter, what’s left of the Skitter rebels come to the rescue, freeing the 2nd Mass. The Skitter known as Red Eye battles the Overlord, Tom joins the fight after Red Eye is mortally injured. The Overlord is killed. But oddly, Karen, who called the Overlord her ‘master,’ appears unmoved, mysteriously telling Tom “It’s not over” as she escapes.

The 2nd Mass blows up the facility they had come to attack, which included a strange gun pointed toward the sky, apparently not aimed at mankind.

Back in the Charleston facility, Tom’s son Hal, who was injured in the battle, wakes from a coma. A metallic looking bug (apparently planted inside him by Karen’s forced kiss) crawls out of his eye, and enters his ear… Hal then smiles.

Meanwhile, an apparent storm arises outside. Residents of Charleston run and watch, guns raised, as a spaceship lands. An unknown alien (pictured above) steps from the ship, removes his helmet… and…. end of the season! Bwawh!

That leaves a heck of a lot of questions!

Is this alien what the gun was pointing at?

What’s happening to Hal? (and was Maggie going to say she loved him when they were in the tunnel?)

Would an enemy of the Overlords be a friend to humanity, or just another enemy?

When will season three premier? In the after-show, Wheaton said “8 months,” but that’s all we get. No official date has been published.

Did you love season 2? Tell us what you think of the new alien in the comments section below!

I strongly believe the producers even made an effort in emphasizing a kind expression from the new alien once his helmet is open. Just take a look at the way he softens his eyes once he establish visual contact with humans. It seems like a benevolent creature to me.

The new alien has to be at war with the overlords, it only makes sense. As far as being a new ally, that might be a stretch. Earth may just be in the middle of the front lines in an epic war between these races, and being that earth has resources and an atmosphere; it makes for a perfect outpost for each side of this war. Its doubtful that the humans will realize this at first and believe they have a new ally against the overlords. And for that matter it might not play out that the new race is… Read more »

So im not alone to think that this is a possible plot 🙂 Makes no sense that humans get an ally, well in the first episodes it may seem like it but then BAM just as hostile as the fishheads! 🙂

I think that mankind is in the middle of a war between this two alien races and the overlords are harnessing the kids to fight for them. Reason to detroying the weapon (the explenation from the rebel skitter was fake and the overlord was only a bonus) was because rebel skitter army is working with this new race. I hope they are NOT ally. That would be to expected. However, they may appear friendly and after 4-6 episodes into season 3 they would reveal themselves as hostile to humans too. It would be a nice twist! 🙂

The main reason that tells me that they are going to be allies is when Tom (I think) asked Ben(I think) about the cannon they went to destroy and Ben replied saying that the cannon wasn’t meant to be used against Humans. Then whatdoyaknow, new Aliens fall from the sky.

Has to be an ally. I figure if the overlords are running around trying to kill/ enslave everyone there has to be at least 1 other race out there with the power to match them. The overlords probably tried to enslave this new aliens race at on point in time, I would assume this has created a war and that’s why the overlords turn all the children into skitters (to use as soldiers).

Has to be an ally. I figure if the overlords are running around trying to kill/ enslave everyone there has to be at least 1 other race out there with the power to match them. The overlords probably tried to enslave this new aliens race at on point in time, I would assume this has created a war and that’s why the overlords turn all the children into skitters (to use as soldiers).

Maybe the overlord are not much more than pirates in the universe and this new guys are kind of a Police team or some, the came in individual vehicles and stuff.

I believe he is friendly.
Here are the clues,
Weapon was pointing out at? Skitter didn’t care about the weapon or what It’s purpose was. They just wanted to get the overlord.
Maybe humans saved this new Alien race’s world or mother ship?
He smiled after opening his mask must like the o2 also, why an enemy would reveal his brain looking fancy part in front of guns? I love this show.

Did you watch the season finale without me?!?!?! 🙂

According the Art of War of Sun Tzu, to win a war archers and knights are necessary and the skitters are only barbarians, because they fight barehanded. This new alien race are the archers, second mass are the knights.

Whott!! I saw a short footage today… It was amazing!!

I believe that the new alien will become an ally to the Second Mass, but I don’t think the death (or death? never established) of the Overlord will cause much change. It still hasn’t been revealed what’s going on in the rest of the world, and if the 2nd mass is the only mass “resistance”, then its likely that the fight will now turn into more of a global fight, with the new aliens at the side of the second mass. I mean this show probably has no more than three or four seasons left, and the series will have… Read more »

It kinda looks friendly, doesn’t it? Almost looks like it’s going to crack a smile before the cut-away. I don’t know though.. Great show!

That’s what I thought he was going to do!

Another clue is Tom putting down his weapon. These guys seem to be friendly