Sons of Anarchy star, Charlie Hunnam, and Dakota Johnson have been confirmed to play the roles of Christian Grey and Anastasia “Ana” Steel respectively.

E. L James just confirmed her decision in a tweet earlier this morning which you can see in the picture below.

Ian Somerhalder, Matt Bomer and True Blood’s Alexander Skarsgard, were few of the several actors rumored to have been casted for the lead role.

Sorry Ladies! Charlie Hunnan will have to do. Dakota Johnson is one lucky girl!

The fifty shades of Grey novel is based on the Twilight Series but due to it’s mature content, Universal might choose to release it with an NC-17 rating.

The film adaption of the novel is set to be released August 1, 2014.

What do you think of Charlie and Dakota as ‘Christian and Anastasia?’ Let me know in your comment below.

Also be sure to share this with your friends and followers using the buttons below – and follow me by email for the latest! 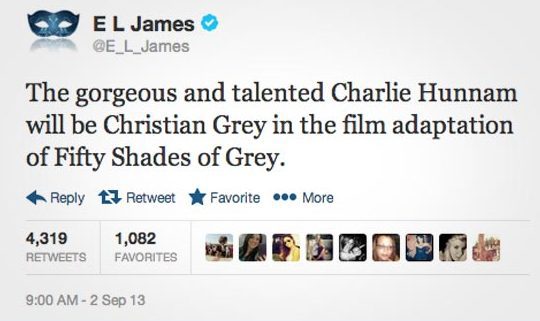