With all the films coming out the next four months, one that will no doubt garner attention is Les Misérables, the film adaption to the hit musical.

Following the plot of the musical, Les Misérables tells the story of Jean Valjean, an escaped prisoner whose life is forever changed when he adopts Cossete from a dying woman named Fantine. The lives of Jean Valjean and Cossete are put to the test as the two must endure a revolution and all the struggles that come along with it.

This film features two major elements. First and foremost is the cast, as in this ensemble is the likes of Hugh Jackman, Russell Crowe, Anne Hathaway, Amanda Seyfried, Helen Boham Carter, Russell Brand and several others to round out the group.

The other major element behind this film is director Tom Hooper, who is known for his work in the academy award winning film: The King’s Speech. For that reason alone, a lot of people are expecting great things from Les Misérables.

The film will not be out until December. A trailer has already been released, and more recently there was the first behind the scenes look to the movie. Now hitting the web is the latest poster for the musical film.

Much like the Broadway poster, this new image reflects the iconic image behind the Musical, the difference being that this one displays in an actual photo.

Here’s the new poster. What do you think of it? Enter your comments below. 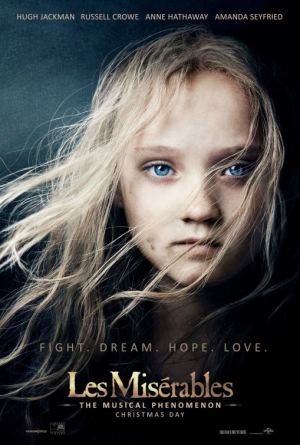