It’s a charge I often see on the Google News Help forum, upon which I volunteer as an expert (what Google calls a “Top Contributor“).

Examples of posts accusing Google News of bias include “Why do you consistently post more liberal news articles than conservative?“,  “Why is Google News so liberally biased?“, “How can I easily BLOCK Fox News from my Google News experience?“, “Why no Fox News in Google News?” and “Google News bias“.

Sometimes readers complain that Google News leans left. Other times that it’s too conservative. Some posts suggest that Google News is in the tank for Clinton. Others that they are in league with Trump.

Is there any truth to all this?

To find out, four times a day for seven days, I collected the titles of every headline posted on the Google News homepage that included the words “Hillary”, “Clinton”, “Donald” or “Trump”.

The results were then compiled and marked whether they were favorable towards the candidate mentioned, negative to the candidate, or neither.

Before we dive into the results, a couple of notes:

• I tried out a number of different criteria when judging favorable/unfavorable. What I found that provided the most reliable results was thinking to myself – is this something that the Trump or Clinton campaigns would like to see said about their candidate, or does it help get a message out that they were promoting at the time? If so, it was marked favorable. If it was something they would likely not want to see published, it was marked as a negative for them.

• The results are a snapshot in time. The survey of Google News results was collected in the seven days leading up to the first presidential debate (Monday, September 26, 2016). If one or the other candidate was having a particularly good or bad day or week, that would be unavoidably be reflected in the survey.

• 817 article headlines were collected during the seven days. Some titles are repeated as they would resurface throughout the week based on trending news cycles.

• The actual article was not considered. Just the headline.

• When a Google user is signed in to their Google account, Google News results are affected by a Google user’s history, interest selections, and preferences. To avoid the results being tainted by my own surfing history and interests, the survey was taken in incognito mode while signed out of Google.

• You can see a full list of the article headlines and my responses to them here. The favorably ratings are based on my sole, fallible, and sometimes inconsistent, opinion.

Now for the big reveal: 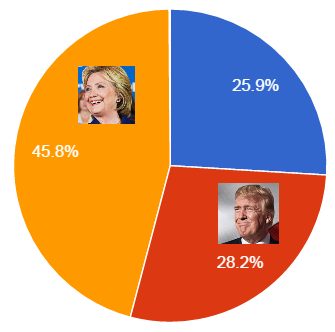 Does this prove that Google News is in the tank for Hillary Clinton?

According to Google, “Google News is a computer-generated news site that aggregates headlines from news sources worldwide…”

As a news headline aggregator, Google News should accurately reflect the content that news publishers are generating.

According to a recent report from The Center for Public Integrity (CPI), more than 96% of donations to Trump or Clinton from news media profesionals – went to Clinton.

If 96% of major media favor Clinton, and that favoritism shows up in their reporting, it’s going to be reflected in any news headline aggregator that does not edit their content manually.

Google News also states they feature “a wider variety of perspectives from which to choose” and “on Google News we offer links to several articles on every story, so you can first decide what subject interests you and then select which publishers’ accounts of each story you’d like to read.”

If you accept the evidence that, overall, major media tends to support Clinton (a report out yesterday from USAToday says that 70% of Americans believe that’s the case), it may be that the focus on providing different viewpoints actually raised the results for “favors Trump or is negative about Clinton” in the survey. Clinton only got a 45% favorable headline rating.

So while my survey shows that Hillary Clinton had more favorable headlines in Google News during the survey period, I believe the results are a reflection of a wider media bias, not the results of a bias within Google News.

As a news consumer, what are your thoughts on media bias and Google News?