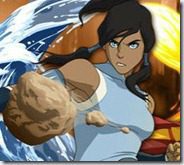 My family just watched the first season finale of The Legend of Korra and it was spectacular.

Nickelodeon’s series, The Legend of Korra, debuted earlier this year – much to my nine year old daughter’s delight. She did an early preview of the show on her site, Gina’s News For Kids. We also did one here at CP.

Korra, while a kids show, is also very enjoyable for adults. It does deal with some advanced themes and may not be appropriate for very young viewers. It is rated TV-Y7-FV, which indicates it is directed to children 7+ and contains fantasy violence. But not only is there violence (martial arts, guns, electrical weapons, fire, bombs, missiles, etc.), there is also a love triangle, scary figures in masks, glowing eyes, even a murder/suicide.

The first season’s storyline also deals some pretty advanced concepts, including a legitimately aggrieved people, misled by a power hungry leader, fomenting a violent revolution against our heroes. This, along with several other themes touched on in Korra, has led to some great family/educational discussions of parallels between The Legend of Korra and modern real-life history.

The hour long finale (two half hour episodes) of Korra brought the entire storyline of the first season to a close (apparently, at least). We appreciate the fact that it was not left in a cliff hanger. It certainly could have ended in a big one – which would have been agonizing. Perhaps the producers felt, correctly in this family’s opinion, that leaving the story on a sad note would have left many kids disinterested in returning to the show for season two.

Still, the finale was very intense and emotional. At one point, my daughter ran to her room not wanting to see what might (and did) happen,  but she quickly came back after being assured by her parents (with fingers crossed) that it would all work out all right in the end.

And it did, and was very satisfying.

With great story telling, deep character development, an intriguing storyline, and dramatic music, The Legend of Korra is a gripping and enjoyable show with great potential for the long run.

Nickelodeon posts full episodes of season 1 on their site here. No word yet on a Legend of Korra season two release date. We will watch for it though and let you know when season two is announced.