Millions of children under the age of 13 have their own Facebook accounts, despite Facebook’s age requirement, according to a new study.

Facebook requires users to be 13 years or older. When signing up for a Facebook account, users are required to enter their birthdate. If the user enters a birthdate that indicates they are younger than 13, the registration will not be processed.

But children, or their parents, are obviously lying about the birthdate to get around this requirement.

Last year, Consumer Reports said that there were 20 million active Facebook users under the age of 18. Extrapolating MinorMonitor’s data, that would suggest more than 7 million of those users are 12 years old or younger.

Other concerns that parents reported included cyberbullying, strangers, children sharing too much information, identity theft, viruses, pornography, and sexting. 30% of parents in the survey said their child had experienced cyberbullying.

More than 50% of of the parents participating in the survey said they monitor their child’s activities on Facebook by logging into the child’s account. 24% said they monitored their children’s Facebook use by friending them. The study’s authors write that this is “an extremely ineffective way to get to the heart of real concerning activities,” and point out that content that is published and later deleted is never assessable.

MinorMonitor does have a stake in the results of the survey. The company provides a Facebook monitoring tool to parents. Subscriptions to the monitoring tool are currently free. According to their FAQ, they may offer paid premium services in the future. MinorMonitor’s website is at http://www.minormonitor.com. A graphic of the survey results, published by the company, is below. 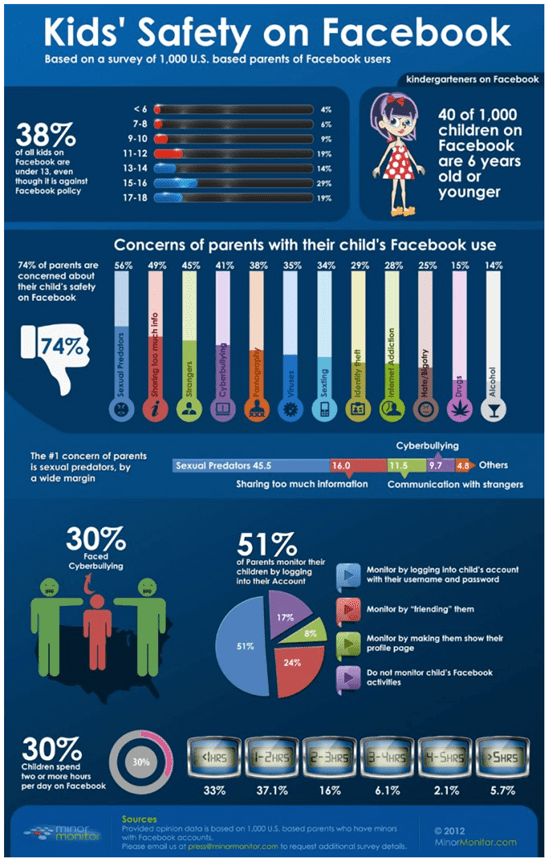