Bob Summerwill, a Senior Software Engineer and Architect at EA has just proclaimed via Twitter that the “WiiU is Crap [and] Nintendo are [sic] walking dead at this moment”.

This comment comes at a time when fans are still reeling from the news that EA has no plans to develop any Wii U software, despite their ‘unprecedented partnership’ which was announced for the Wii U just two years ago.

In his Tweet, Mr. Summerwill describes EA’s move as “an utterly intentional decision to focus our resources on markets which actually matter … like mobile, and Gen4”.

This means that a number of EA franchises such as Mass Effect and Need for Speed may never revisit the Wii U.  It also appears unlikely that any Star Wars games will grace the Wii U, as EA has recently acquired an exclusive license for that franchise too.

Although the Tweets were quickly removed, the damage was already done.  Commenters have already declared the Tweet to be “unprofessional and irresponsible”, and some have even stated that they will boycott EA altogether.

These Tweets have occurred not two months after Adam Orth, a senior Microsoft Studios employee, was fired for a similar Twitter conversation.  Perhaps in gest, Mr. Orth commented on rumors that the next XBOX will require a persistent internet connection, by telling users to “deal with it”.

While Adam Orth’s comments could be construed as a personal opinion, Mr. Summerwill’s comments seem to speak for EA.  Not only do the Tweets align with EA’s actions of late, but they are worded in a manner which will make them hard for the company to deny. 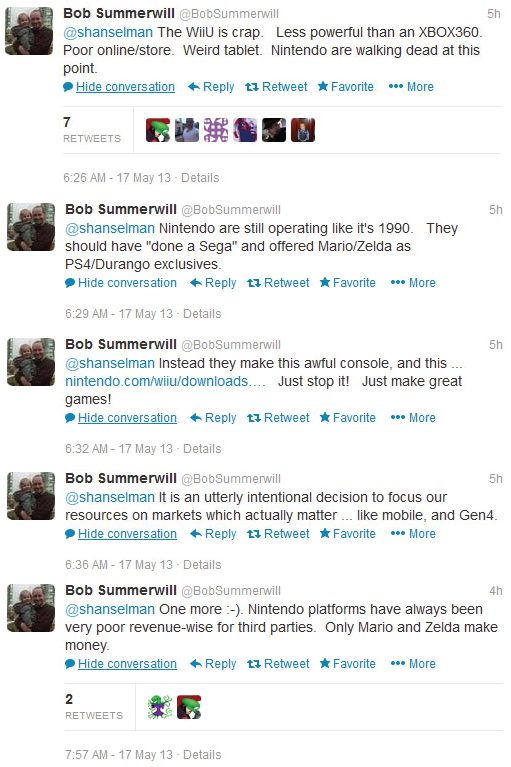 Considering EA’s track record and Nintendo’s ability to turn a profit, the news isn’t all bad.

While fans may be disappointed to miss out on some beloved EA franchises, Nintendo has always held a successful line of first party titles – and an ever-increasing line of third party Wii U titles.

With a year of big releases lined up, this news does not spell the end for Nintendo by any means.

So what do you think about Bob Summerwill’s Tweet?  Do you think Mr. Sommerwill will keep his job?  What are your thoughts on EA?  Will you miss their games on the Wii U?  Tell us below!