Once Upon A time – The Lady In The Lake

In Once Upon A time, S2, episode 3, it seems everyone gets a bonding moment, or the chance to meet someone, for the first time.

One of the first time meetings shown are with Cora, who is Regina’s mother. Is Cora really as evil as Regina claims she is?

In the  opening of the episode, our heroes make plans to take back the kingdom. The same kingdom Regina stole from Snow by killing her father.

To make matters worse, King George is after James for not keeping his promise to marry King Mida’s daughter, Princess Katherine ( Season 1 episode 20 tells her story). The King has a new general to help find James. King George’s new general is the Leviathan, aka Lancelot (Round Table knight gone rogue). The army has found our heroes and now Snow, Ruby, and James must split up to get away. 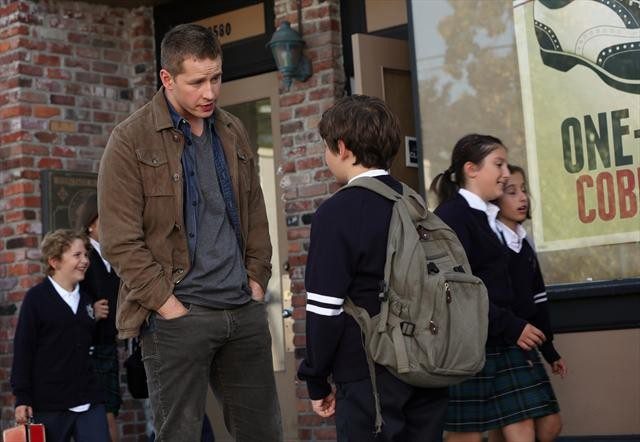 James and Henry have their "one on one time"

While Emma and Snow try to survive, James and Henry, work on getting mother and daughter back to the present day.

Henry finds Jefferson/The Mad Hatter (against James’ advice). Henry works on convincing Jefferson to help them open the portal to get his mom (Emma) and grandmother (Snow) back home. Jefferson says he can’t help,but it seems he has some heavy baggage concerning his own abandonment issues.

Back in the past poor Snow as been cursed. This time by King George, who gave Snow a cursed drink and informed her  she would never have children. King George’s soldiers find James and in the process James’ mother, Ruth, is hit by a poisoned arrow. Only the waters of the Lady in the Lake can possibly heal her since the poison is too powerful for fairy dust. Ruth suggests that Snow drink of the lake to cure her of the curse of being childless. To tell more would ruin it for the fans who haven’t seen the episode yet!

To sum it up, Snow and Emma (who almost didn’t exist), are trying to find a way home. The four women, Snow, Emma, Mulan, and Princess Aurora, end up banding together after finding out that Cora has more magic than she claimed. Cora surely has something up her sleeve with an agenda of her own. We are waiting to find out if Jefferson will help to open the portal.

As the characters have some “one on one” bonding time, we get to watch them grow into themselves and learn to live the hand they were dealt. The next episode is coming in one week, on October 21st.