Savagery, Survival & Love in The Narrow Road to the Deep North

Tasmanian-born writer, Richard Flanagan has won the 2014 Man Booker Prize with his harrowing novel, The Narrow Road to the Deep North.

The reviews for this novel are many and varied, but the general consensus is the same: Flanagan’s novel is a magnificent story of war, love, guilt and heroism.

Richard Flanagan said in his acceptance speech, ‘Novels are life, or they are nothing’, and The Narrow Road to the Deep North is most certainly an unflinching examination of the deep capacity of humanity for cruelty and love.

The novel is set in a Japanese POW camp on the infamous Thailand-Burma railway and focuses on surgeon, Dorrigo Evans, who struggles to protect the soldiers under his command, and returns to civilian life numbed by his experiences.

He is haunted by memories of an intense pre-war affair with his uncle’s second wife, Amy, and by the suffering and death he witnessed in the camp. Like most compelling, authentic characters, Dorrigo Evans is not always easy to like, but he is fascinating.

Have you read the Man Booker Prize winner?

Let us know what you think… 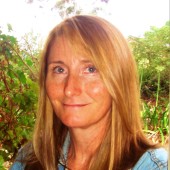 KM Steele holds a PhD from Macquarie University and has academic and creative work published in various journals and online, including ABR, Skive, Australian ejournal of Theology, Colloquy, Transnational Literature, Ripples and Antipodes.