From all the recent images and videos being released it appears that this final season of ‘Sons of Anarchy’ is going to be epic.

The latest picture was revealed by Entertainment Weekly here and can be seen below.

It gives fans their 1st look of Marilyn Manson in action and offers another clue as to how this final season will play out.

In the pic. Manson’s character, a white supremacist prisoner named Ron Tully appears to be having an intense conversation with Jax (Charlie Hunnam).

Actually,  Manson’s character looks to be smirking, while Jax has a look of death about him, so it will be interesting to see what that conversation turns out to be.

This pic confirms that season 7 will in fact pick up 10 days after the end of season 6, with Jax in jail on a parole violation and looking for vengeance with the help of Manson’s character.

For SOA fans, seeing anyone, especially Jax, in prison orange is disconcerting. In seasons past, prison and SAMCRO have not mixed well ( R.I.P. Opie).

However, odds are Jax makes it out of prison in one piece, since the 2 clips that were recently released show him riding his bike and clearly no longer incarcerated.

Based on those various clips, it would also appear this last season is going to surpass all previous ones in terms of both scope and plot lines.

It also appears that the rumors of everyone being killed off in this last season might have some weight to them.

Show creator Kurt Sutter did say in an interview a few months back that he thought fans would be “satisfied” with the ending, so there’s still some hope.

The seventh and final season of ‘Sons of Anarchy’ premieres September 9, at 10pm, on FX.

The premiere episode will run an hour and forty-five minutes long and will be followed by an after-show, called ‘Anarchy Afterwards’.

Tell us what you think will happen on this final season below. 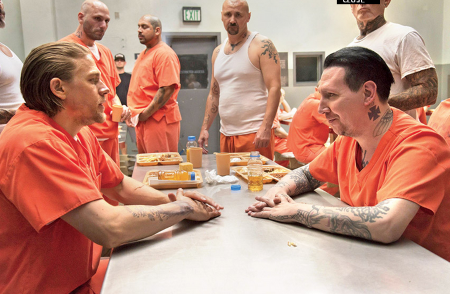 I am a mom to 2 little boys: a 7 year- old and 5 year-old and they are the only things I love more than writing. I am an avid reader, a big sports fan and love a good deal. Most of all, I love keeping up on the latest consumer news and sharing my findings with all of you.