With Comic-Con coming next week, The Amazing Spider-Man 2 is certain to be a highlight for the event.

The sequel will be hitting theaters next summer. Sony is no doubt getting a head start on the film’s publicity by not just having a panel for next week, but teasing fans in the latest Entertainment Weekly.

The magazine features new images and a cover that will certainly have the movie world buzzing.

The picture features Spider-Man facing one of the film’s villains: Electro.  The cover gives us the first look at the electrified baddie. For months, fans have only had some set pics of Electro, but we have never gotten a real look for the character.

Now, thanks to the magazine, fans have an  idea of what Electro will look like. It may not be a full portrait, but the character’s look seems to blend of the classic outfit and the design from the Ultimate series.

Whatever you may think of this choice, having Electro featured on the front cover of EW should be good for Sony Pictures.

The Amazing Spider-Man 2 features Peter Parker, played by Andrew Garfield, balancing his life as a student and Spider-Man.

Upon his graduation, Peter reunites with his old friend Harry Osborne (Dane DeHaan).

With Harry’s return, an assortment  of issues comes about. Such as the rise of the villain Electro (Jamie Foxx), and Peter maintaining  his relationship with Gwen Stacy (Emma Stone).

Yet, the biggest matter is the mystery of Peter’s powers and the disappearance of his parents.  The film also stars Colm Feore, Paul Giamatti, Sally Field, Chris Cooper, B.J. Novak, Felcity Jones and  Sarah Gadon.

At the moment, it appears that Spider-Man will steal center stage at Comic-Con; hopefully more will be announced next week.

The Amazing Spider-Man 2 swings into theaters May 1,2014.

Get a look at the cover of Entertainment Weekly: 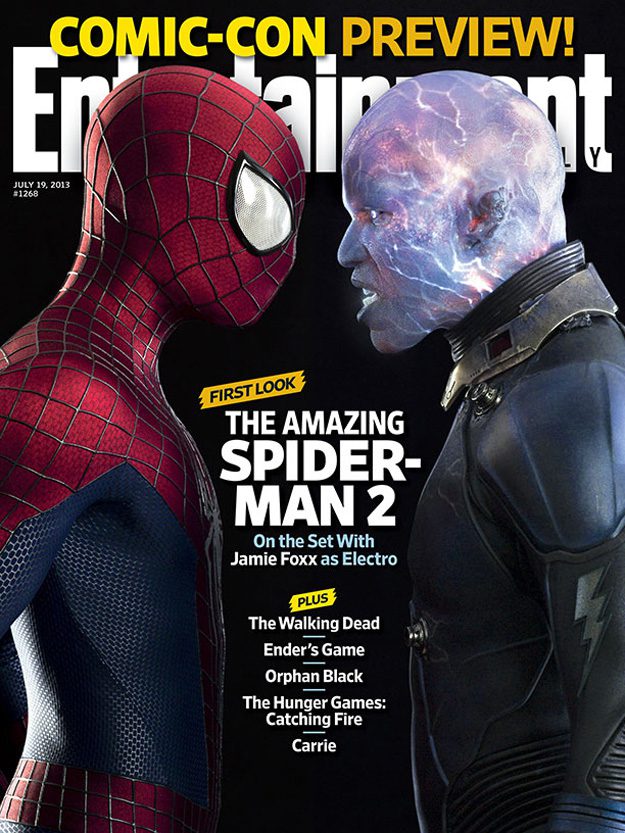