Disney and Lucasfilm have had their lips sealed tight over the incoming Star Wars movie, but the slow trickle of information has been rewarding for patient fans.  We’ve known the official cast now for months, and got a glimpse of some awesome footage with the new teaser trailer, but now we finally have some character names to chew on.

Although none of them provide any big giveaways, there is plenty of room for speculation.  Each of the characters is specified on a vintage looking trading card with a brief (sometimes enlightening) description of the scene.  The most interesting thing from all of the cards is not necessarily what is revealed, but what is witheld, with a couple main characters only being referred to by a first name (as you’ll see below).

With barely more than a year to go, and several characters yet to be unveiled (such as the entire original trilogy cast), so this is still little more than a taste, but a taste of Star Wars is almost never a bad thing!

The New Droid is BB-8 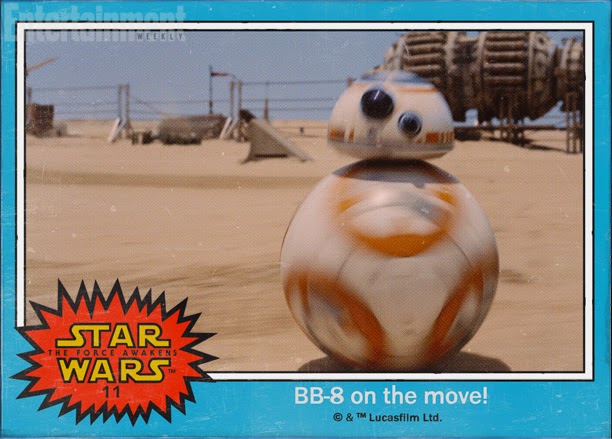 Star Wars droids are typically some sort of number/letter combination.  This isn’t anything new, but it’s still an interesting tid-bit.  We only have a glimpse of this new droid, but I have a feeling it will play more than a small part in the new movies to come.  I doubt it will necessarily replace R2-D2, but maybe it will be a character of similar significance in the years to come. 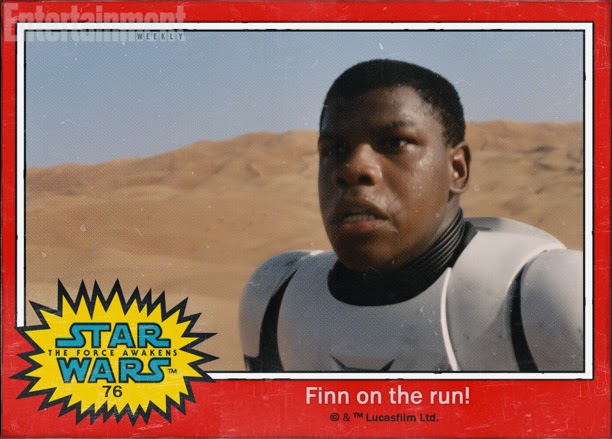 Finn could be both a first name, or a nickname, but the absence of a last name is slightly conspicuous.  Is it Calrissian, or Windu?  It doesn’t seem likely, but the exclusion of the last name suggests something is being held back intentionally.  He is also on the run.  This isn’t especially useful, as that seemed obvious in the trailer, but is that his armor, or a disguise as he is “on the run?”
Dark Robed Character is Kylo Ren 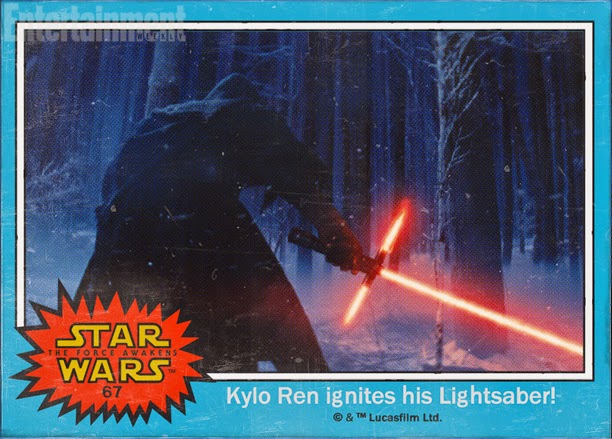 We still don’t know who’s under the robe, but we now know that his name is Kylo Ren.  The inclusion of the last name here is interesting.  There is no one with that name (or a similar one) in any existing Star Wars material, so it’s likely a brand new character.  Many people probably expected a name beginning with “Darth,” but we still don’t actually know if he is, in fact, a Sith, or simply a dark force user.
Oscar Issacs is an X-Wing Pilot Name Poe Dameron 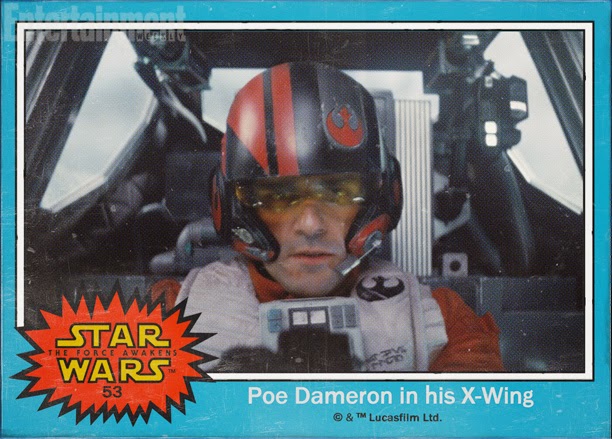 Another character with a full name.  There is no existing material on anyone with a similar name, but it is speculated that “Poe” is a reference to Edgar Allan Poe, because Poe Dameron may share a similar struggle between the dark side and the light side. 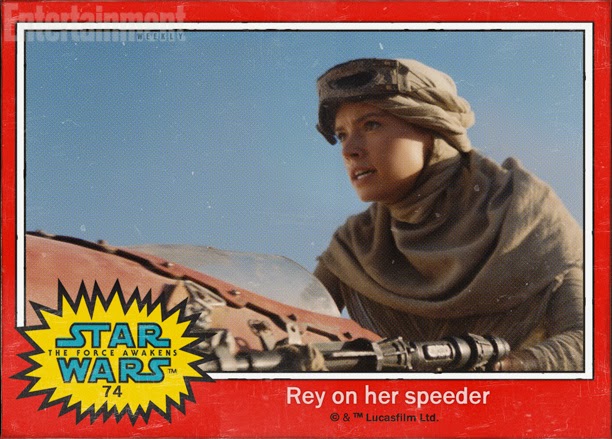 They’re excluding the last name again.  From the original casting, many people wondered if Daisy would be playing the daughter of Han and Leia Solo.  This is a far stretch from confirmation on that, but there is no contradiction at this point. 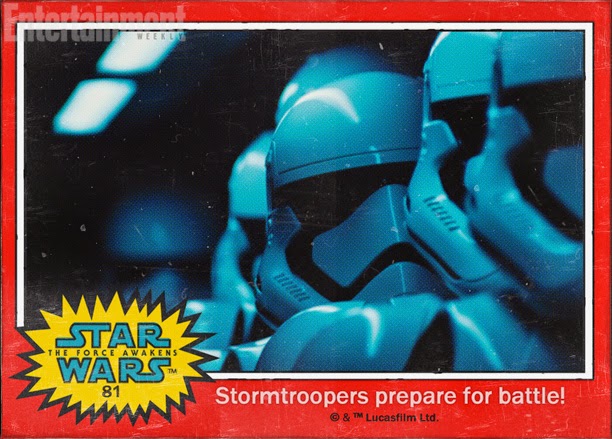 The new stormtrooper design is pretty cool looking!  This card says they are preparing for battle.  That’s not the most useful information, but the look at the updated design is definitely cool to see.  Also of note, remember when Princess Leia said “aren’t you a bit short for a Stormtrooper” to Luke?  Well, Mark Hammill and John Boyega are the same size.  That Stormtrooper in the middle appears to be a bit short as well.  Coincidence? 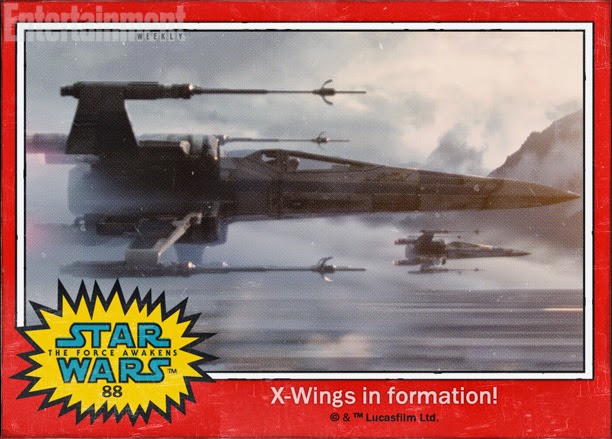 Here’s the new X-Wings!  If you look closely, you’ll see that the wings vary slightly from the design we know from the original trilogy.  They are a single wing that separates along a seam in the middle, as opposed to two stacked wings.  Other than that, they are the same X-Wing design we know and love.  This shot of them over the water is definitely one of the more exhilerating shots from the trailer. 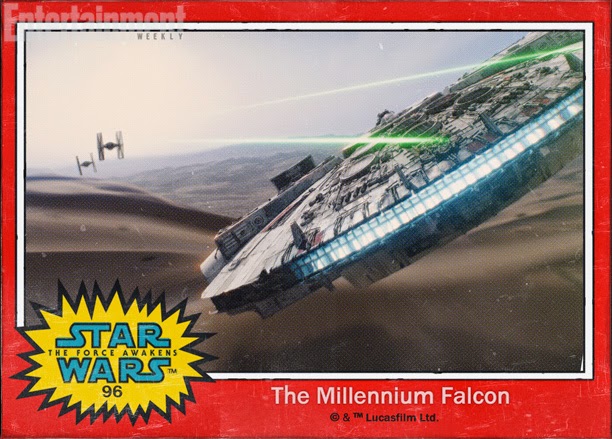 It’s the Falcon!  The only ship that might be more exiting to have back than the X-Wings!  It looks like the reflector dish on the front left was replaced with a rectangular one after Lando destroyed it while flying through the second Death Star.  There are also TIE Fighters, but we can’t get a good look at them yet.  They appear to be basically the same (on the surface) as the TIEs we already know, though.
So there you have it.  It’s not much, but any Star Wars fan will be thirsty for even the slightest bit of information on this movie until it launches next December.  Especially when we have to wait until May to see the next trailer before Avengers: Age of Ultron.

All things tech, especially if it's portable or Android. I live in mobile, but if it's happening and it's geeky, then I probably know about it and have an opinion on it. You can find me in short form on Twitter @smcolbert, or long form at Geek5auce.com. Yes that's my real name.