To all outward appearances, it certainly would appear that the world is being overrun by e-books and e-readers, and that real books… the kind you can hold, smell, leaf through… will soon be a thing of the past.

But according to a new poll from USC Dornsife and the Los Angeles Times, almost 90% of e-reader owners still read books made out of paper. 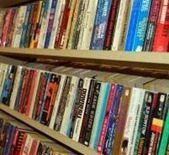 The poll included 1500 participants in the state of California. 21% of those surveyed said they own an e-reader. Of those owners, 87% said they were satisfied with their e-reader. But despite that high satisfaction rate, 86% said the also read books in print. In fact, 54% said the majority of books they read are in print form, not digital.

So while Kindles and Nooks and even the Kobo Vox get all the splashy headlines these days, old fashioned paperback and hardback books are still being read, even by those of us that have a digital alternative.