It’s going to be a holiday of a lifetime. Greece, what could go wrong?

High school is never easy and it’s more difficult when you aren’t part of the right clique. We witness the awkwardness of growing up in the  award winning series The Inbetweeners, which showcases Will McKenzie, played by Simon Bird. Bird won the 2008 British Comedy Awards for Best New Male Newcomer and 2009 British Best Comedy awards for Best Actor.

The Inbetweeners has Simon Bird’s character Will McKenzie narrating  life as a high school student in the UK. Will’s parents have recently divorced and his mother Polly McKenzie (Belinda Stewart-Wilson) can’t  afford the private school he attends so he must attend Rudge Park Comprehensive school.

Will has a dry wit and uses it to his comedic advantage when he becomes friends with some unlikely classmates.  The first is Simon Cooper  (Joe Thomas), who is assigned to Will on his first day, by cantankerous teacher Mr. Gilbert (Greg Davies). Simon doesn’t want to take Will on in the beginning, but eventually comes around and introduces Will to his other pals Neil Sutherland (Blake Harrison) and Jay Cartwright (James Buckley).

Each boy has their issues and they all play out in the series which  is raunchy and disturbingly relatable. All the boys are obsessed with losing their virginity, but Jay is really obsessed. Neil is not the brightest bulb in the bunch but doesn’t let much phase him.

Simon who is the one closet to normal next to Will is obsessed with his family friend Carly D’amato (Emily Head). Will and his friends are constantly trying their best to become part of the cool crowd and hopefully get a girl in the process.

As viewers we can relate to their zany adventures such as trying to buy alcohol at a pub while under age, getting their drivers license, and skipping school. It seems that being a teenager is pretty much the same regardless of where they are from. You can keep up with The in betweeners on http://www.bbcamerica.com/the-inbetweeners/ 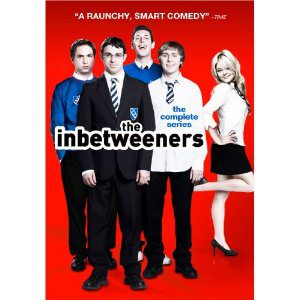 The Inbetweeners is so popular that there is a US version of the show.  The US version was developed by Brad Copeland for MTV, who is best known for creating the Fox show Arrested Development.

The Inbetweeners the movie is premiering in the US on Sept. 7th, 2012, with the original British cast. The movie follows on the boys last year in school. The antics that are viewed in the series become even more hilarious in the movie. Will gets his parents to give him a trip to Greece and the rest of the boys parents follow suit.  If you want to check out the series before heading for the movie you can find the series on Amazon Instant Video, Netflix, and Hulu. Believe me, if you love depraved shenanigans, cheeky dialogue, and just have fun living vicariously  though others then check out The Inbetweeners.

I rate The Inbetweeners at  4 of 5 stars.

I rate The Inbetweeners Movie at 4.5 of 5 stars.