Top 2 Performances On The Voice For 9/25 [Video Goodness] 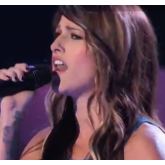 Cassadee Pope on The Voice

Tuesday’s episode of The Voice offered us a variety of diverse talent.

Nevertheless, there were two performances that stood out from the rest:

She had great vocal control as she sang with a sense of authenticity and pureness. She was simply a joy to watch as her voice, in parts, reflected the sounds of the great Alanis Morissette.

All four judges turned their chairs, vying for her to join their team. Receiving a standing ovation by Adam and Christina, she began to wipe tears pouring down her face. Pope ended up choosing Blake. Out of all the judges pitches, his was by far the most compelling plea, stating that he believed with 200% of his heart that she was a superstar.

It is definitely time for back-up singer Amanda Brown to be at the forefront.

It’s always risky to sing an Amy Winehouse song – unless you know how to make it your own. Brown did just that. Oh, and dang, that girl has some slick dance moves. You could tell music flows through every inch of her body.

God Bless Cee-Lo for turning his chair and ultimately ending up being her coach! Why didn’t the remaining judges immediately turn around? I honestly loved the way she delivered the song by slowly building up the anticipation as she finally hit some incredible notes at the end.

Adam and Christina explained they wished she would have hit those notes earlier. Yet, Christina commended her for her intricate ad libs. Nevertheless, Cee Lo picked the right girl. she’ll progress far in this show.

Did you watch Tuesday’s episode of The Voice? Who did you think was the best? Leave your comments below.

As a graduate of the University of Oregon, Berenice finally realized that her passion is to thoroughly entertain and inform through her writing. She loves offering her unique perspective on all things entertainment as a NFS contributor. On the side, she enjoys updating her blog: TenaciousTwin. Follow her on twitter @BereniceFamili