First off, still reeling from #Lemonade, I was not really ready for the emotion last night’s episode would require, (Thanks, Beyonce!), but I pulled it together long enough to dive in.

This is the first season that the book readers are going in blind. We have no home court advantage. There are a few major things from the books that have not happened on screen yet, but for the most part, we are just out here without a net! It feels risky and I like it.

Before I get into My Top Five I have to ask, What’s with the long recap of season five? We’ve been bingeing all week, we know what happened. Y’all are wasting precious moments. I looked at the clock the whole time. I want my full 60 minutes worth.

Anyhow, on with it…

• Dolorous Edd is a rider. They didn’t tip-toe around the big question. We start with Jon Snow’s body still making the bloodiest snow angel ever, while Ghost howled like an eery alarm clock. Meanwhile, everybody at the wall decided to sleep in.

I really expected them to spend a few episodes sleuthing around trying to find out who killed the Lord Commander. But nope. Thorne is all like “yeah we did it and what?”, and most of the Night’s Watch is like, “Oh, okay then”.

But surprise, surprise, Dolorous Edd is not having it. He rounds up what’s left of Jon’s crew and says we ain’t having it and goes out for reinforcements. I’m pretty sure he’s going to get some wildings to hold them down as they get revenge.

Also, this means nothing. Call me obsessed, but I still think Jon Snow is alive or will be reborn, or morph into some kind of dragon. We haven’t touched the R + L = J storyline (if you don’t know what that is, google it, unless you avoid theories and spoilers, then just don’t).

Also, are they just locked up in that room with his dead body? Why? Shouldn’t they burn it so it doesn’t get up with those crazy blue eyes? Something’s up. I can feel it! 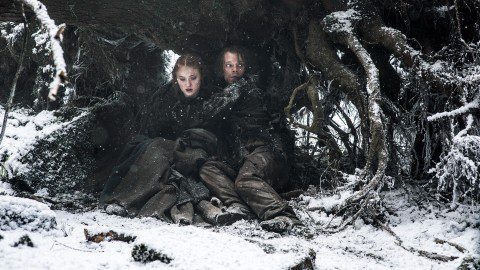 • Sansa FINALLY catches  a break. I mean this girl has had nothing but misery, heartache and just DRAMA since she left Winterfell 5 seasons ago. And I’ll tell you one thing, if I get kidnapped, forget Liam Neisen, I’m calling Brienne of Tarth. She will come find you. I mean hey, they were just about done for but “neither rain, nor snow, nor sleet, nor hail shall keep Brienne”… wait maybe that’s the post office… anyway. Brienne is a beast.

Pod is getting his skills up. And it seems maybe Theon is on the road to redemption. Can we ever really forgive him? I’m not sure. But I loved this moment for both Brienne and Sansa, they need each other for whatever comes next.

•  Sand Snakes are not playing with us! So most people were not impressed with Dorne or any of the characters (except Oberyn, RIP) or action that went on there last season.

Book readers were disappointed at the lack of the original storyline there, we were expecting so much more. The powers that be must have heard us, because what I was not expecting was Ellaria Sand and her daughters to go buck wild and just hack everyone, including Prince Doran, to pieces in a complete takeover.

We were just getting to know Prince Trystane and he got it quick straight and dirty with no chaser. Well, farewell Prince, we barely knew ye.

I feel like there was a hint of something to come in Ellaria’s comment about Elia’s death and no more weak men ruling Dorne.

Is that a hint that an important character missing from books, will show up in Dorne? Hmmm… told you we still have a few secrets left, I won’t spoil them here but inbox me, let’s chat about it!

•  So once again my girl Dany finds herself in the midst of a great Khalasar, this time bound and whipped like the slaves she’s worked so hard to free.

When she is brought before the Khal, his wives and advisors, they are shocked for a moment that she speaks Dothraki. This at least gets them to pay attention. So she tries giving them her full title, Daenerys of House Targaryen, the First of Her Name, Queen of Meereen, Queen of the Andals, the Rhoynar and the First Men, Breaker of Chains, Mother of Dragons, and about 17 other titles no one cares about, and child, they LOL’d all in her face. They were all “Cool Story, Bro.”

Let me tell you what this showed me. Dany has been sitting up in that tower in Mereen to long. She’s forgotten the real world. Maybe she’s getting a little soft, a little used to people cowering at her feet, a little cocky. I feel like whatever she goes through at the hands of Khal Jhaqo is going to better prepare her and motivate her to get her behind back to Westeros… although someone just destroyed all her ships. But, I mean, you have a dragon.

•  Finally, one of the craziest moments of tonight’s episode came at the end.

Everyone was sure The Red Woman was going to be the catalyst in bringing Jon back or finding some magic to save his life, because I mean, you birth shadow ninja assassin babies on a whim… surely you can swing a little resurrection.

But she seemed so confused by Jon’s death, humbled and a bit lost. We’ve never seen this character show any vulnerability. I realized we know next to nothing about her at all. So when she dropped her dress and stared into the dirtiest mirror in Westeros, I wasn’t really shocked, we’ve seen her naked before. But baby, when she took off her necklace and instantly became the old hag queen from Snow White, I was like HOLD UP! What is happening? I have questions!

So please comment, Tweet me, Facebook me and tell me what your top five moments from tonight’s episode were and what you think is going to happen next.

Until next week, keep hope alive for Jon Snow and let’s hope they don’t send Dany to the nunnery!