Toy’s “R” Us, one of Microsoft’s many retail partners, has placed the Xbox One as the sole video game console on their  2013 “Holiday Hot Toys” list. Dubbed the “Fabulous 15.:

The list is meant to provide some insight into what items are likely to be on the “wish list” of the younger generation for the coming holiday season.

In an effort to  reassure customers as to the legitimacy of the listing, a statement was released by Lisa Harnisch, Senior Vice President of Toys R Us, that went as followed : “Identifying the toys that will make the Holiday Hot Toy List is no easy feat. It’s something we take great pride in – ensuring that the toys named with this distinction are truly the toys that kids from all corners of the country will be most excited about,”

Holiday Sales and Beyond

The list, over the years, has had a massive influence on what items actually get picked up from store shelves for the coming Christmas/Thanksgiving season. Many shoppers, who may not necessarily be “hip” to what the kids are into these days, use the list as a means of filtering out the clutter.

The high profile nature of this listing almost certainly ensures that that the Xbox One will emerge to be the best selling console (at least among TRU shoppers) this holiday season. Also, due to the inherent nature of the videogames market, it will likely continue to benefit from this initial sales boots late into the coming year.

The exclusion of the Playstation 4 (the Wii U less so) has come as a surprise to many members of the videogame press. The general consensus, after both consoles were shown off at the E3 press conference back in June, has been that Sony’s offering was, in-fact, the one that had emerged victorious in the hearts of most gamers. This however, does not necessarily translate into sales and so, the events that are taking place today may be a forecasting of what is likely to happen in the coming years.

Apart from the Xbox One, the list has also included a wide assortment of other playthings, trinkets and gadgets that will surely keep your kids occupied for the remainder of the holiday season. Check out the full list below. 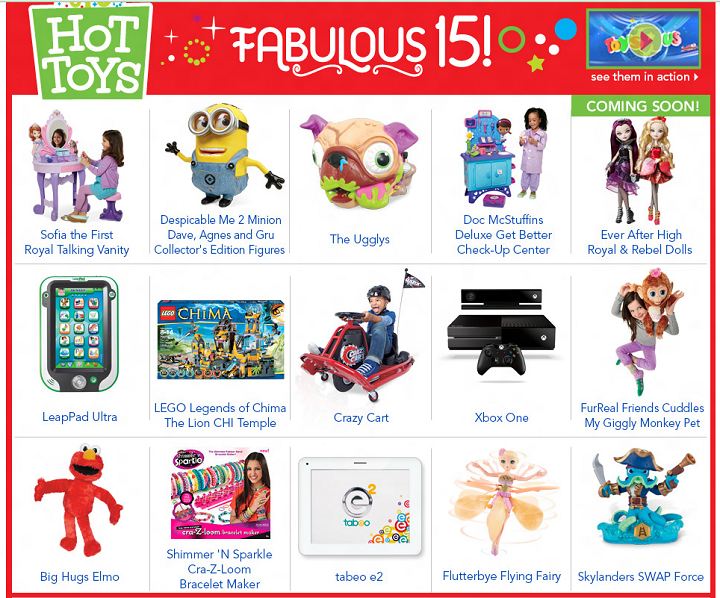