What Daredevil’s Success Could Mean for Marvel

If you’ve somehow managed to not have watched (read: binged) Daredevil, the recently released collaboration between Netflix and Marvel already, you’re obviously not the fan of superheroes your Superman tattoo proclaims you to be.

However, whether you’ve yet had the opportunity to see Charlie Cox’s fantastic turn as a spandex-clad baddie-punching vigilante, you should have no trouble noting how much of an impact this particular streaming-only show has had on the world of entertainment today.

Not only did Netflix order a second season a mere eleven days after the show’s arrival on their platform, but they also used it to roll out a new service to their consumers, namely, descriptive audio for the visually impaired.

Yes, Netflix is using the television series about the world’s most popular blind superhero to roll out a service to make television easier to watch for the visually impaired.

But the real question on everyone’s mind here is how Daredevil fits into the overall Marvel Cinematic Universe.

Yes, the two are connected, but in watching the new series, it’s difficult to see how, outside of an overall continuity check performed quite frequently through having characters reference the members of the Avengers and the events that
rolled out during their debut team-up.

One of the most notable reasons for the discrepancy here is in the amount of violence Daredevil showcases in comparison to the 11 movies and 2 other television shows Marvel has put out so far.

Daredevil is just as beautiful as Thor, but bloody. In Marvel’s Avengers, we saw New York getting ripped a new one, literally, but the death toll, or even the existence of blood, seemed to be nill, you know, until characters from Daredevil start referring to it almost as though it’s the new 9/11.

From episode one in Daredevil we see this ain’t your momma’s Captain America where guns seem to cause no long-lasting damage, or Agents of S.H.I.E.L.D., where they develop new ammunition just to keep from fatally harming anyone.

Daredevil is a place where death occurs, and it’s lasting, and it’s violent.

One could easily say that the movies and broadcast television shows would require a certain amount of more family friendly fare in order to achieve the success they have had, but there’s no denying that Daredevil has proven Marvel is a true force to be reckoned with, no matter how much blood is spattered onto the camera lens in the process.

So, the question is, what does the world of Marvel look like in a post-Daredevil world?  Again Marvel has managed to do what was once believed impossible, with a character whose first live-action outing should have killed the character permanently.  But, Marvel has now proven that their audience is ready for some more adult themes, stories where actions have lasting consequences, and sometimes people have to make decisions they believed completely against their principles, only to ensure that justice is done.  Could that mean that we’ll start seeing films that deal with more adult themes as well?

Well, the truth is, probably not.  But, there is one piece of this puzzle that could make everything get interesting quickly.  Daredevil, as well as the rest of the Netflix series to come, is part of a much more street level version of superheroing within the Marvel continuities.  They’re a far cry from the cosmic battles fought by those iconic members of The Avengers.  Except for one person.

In other words, Marvel has a great opportunity to connect their film and serial entertainments through one character who fits in both worlds.

But of course, no matter what they seem to do, Marvel seems to be the studio that can do no wrong.  Let’s just hope it stays that way.

What do you think?  Would you like to see Spidey join forces with The Defenders in the ongoing Netflix series? 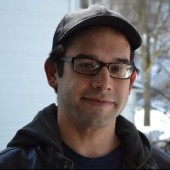 Adam Oster is the author of adventure novels for all ages, including the action packed The Agora Files and The Legend of Buddy Hero. Find out more about him and his books at www.fatmogul.com.