Yesterday we reported on their planned protest of legislation being considered by the U.S. Congress. The Stop Online Piracy Act (SOPA) and the Senate’s version of the bill, the Protect IP Act (PIPA).

The legislation is an attempt to clamp down on the illegal distribution of pirated content. It’s supported by many of the major movie and music production companies.

However, many of the world’s largest Internet companies say the legislation has far-reaching consequences. Critics say the bill would put a huge amount of power into the hands of a government agency. The agency would have the right to block the IP addresses of certain websites from being visited by US citizens, without due process through the court system. It would also put the onerous task of policing users onto social websites and even ISP’s.  Some fear that would cause them to limit their users abilities to access even slightly questionable websites due to an over-abundance of caution, in an attempt to avoid any legal entanglements. Or even block competitors on trumped up allegations.

Wikipedia, along with a number of other major websites, considers it an attack on the right to free speech. 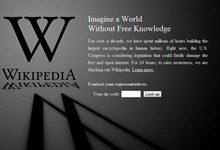 Following through with their protest plans, Wikipedia‘s English language site went dark at midnight, Tuesday night. The homepage of the site is bathed in stark grey colors with a long dark shadow. On it are the words:

Imagine a World Without Free Knowledge

For over a decade, we have spent millions of hours building the largest encyclopedia in human history. Right now, the U.S. Congress is considering legislation that could fatally damage the free and open internet. For 24 hours, to raise awareness, we are blacking out Wikipedia. Learn more.

Wikipedia also includes a form on the page in which a reader can enter their zip code to get a list of their congressional representatives, and they are encouraging readers to contact them to oppose SOPA and PIPA.

While the “learn more” link is currently assessable, all the other pages on Wikipedia’s English version website are visible for only a brief moment, and then covered up by the above statement and eerie background.

Through testing, CP has discovered that Wikipedia is using JavaScript to cover the pages. After turning JavaScript ‘off’ in our browser’s options, we were able to access Wikipedia’s English language site.

While leaving their site completely assessable, Google is showing its support of the protest by blacking out the famous Google logo on their website. There is also a statement and a link on their homepage that says “Tell Congress: Please don’t censor the web!”

An CP investigation of other major search engines and websites, such as Bing, Facebook, eBay, Yahoo!, Craigslist, WordPress.com, Twitter, and others, did not find any notices or changes in support of the protest on their homepages, though a number of them have voiced opposition to the legislation. The social news sharing site Reddit.com is closing for 12 hours today. A list of organizations that have voiced opposition is here on Wikipedia (when you can get to it).

According to Wikipedia, the lights will be turned back on at their site at midnight tonight (Wednesday evening).

As of 11am Wednesday morning, WordPress.org and WordPress.com are both now participating in the protest with ‘black-out’ and ‘censored’ type splash pages on their sites, and information about the protest. Their sites are accessible after clicking on a link.