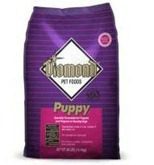 14 people in 9 states have been infected by the outbreak strain of Salmonella Infantis, according to the CDC (Centers for Disease Control and Prevention).

A Diamond Pet Foods manufacturing plant in South Carolina has been linked to many of the cases. The company has recalled 12 brands of dog and cat food so far. The pet foods recalled include certain lots of Diamond, Kirkland Signature, Country Value, Premium Edge, Professional, Taste of the Wild, 4Health, and Canidae.

The company has issued a statement, which includes the following information on how to identify the recalled lots.

For the brands of Chicken Soup for the Pet Lover’s Soul, Country Value, Diamond, Diamond Naturals, Premium Edge, Professional, 4Health, and Taste of the Wild:

“To determine if their pet food is recalled, consumers should check the production codes on the back of bags that have a number “2” or a “3” in the 9th position AND an “X” in the 10th or 11th position. The best-before dates for the recalled brands listed above are December 9, 2012 through April 7, 2013.”

“To determine if their pet food is recalled, consumers should check the production codes on the back of bags must have both a number “3” in the 9thposition AND an “X” in the 11th position. The best-before dates for the recalled brands listed are December 9, 2012 through January 31, 2013.”

As for human illnesses, there has been one reported so far in each of these states: Alabama, Connecticut, Michigan,  New Jersey, Pennsylvania, and Virginia. There have been two reported in Ohio, and 3 each in Missouri and North Carolina. It is expected that these illnesses were transmitted to humans through the handling of the pet foods or by petting/handling infected animals. Whoever, to this point, there have been no illnesses reported amongst pets.

Diamond Pet Foods provides additional information and updates through its site at: http://www.diamondpet.com/information/.