Sunday’s 2013 MTV Video Music Awards was jam packed with some amazing performances. Here are the some of the most memorable moments from the show.

Lady Gaga made her return to the stage with her new single Applause.  There was no meat dress this year, but her wig on wig performance was very distracting.

You can re-watch the performance HERE.

Kanye West’s performance in the shadow was nothing special, but his girlfriend, Kim Kardashian,  supported her man as she tweeted “Best performance of the night @Kanye West!!”.

You be the judge. Here is the performance.

But it was Miley Cyrus’s raunchy twerking performance that everyone is still talking about.

The 20 year old former Disney star danced in a nude pvc-clad suit as she did some racy moves on 36 year old R&B singer Robin Thicke.

Watch the too raunchy for tv performance HERE.

It was expected that Miley would do something a little racy but did she take things too far?

Her fiance and hunger games star, Liam Hemsworth, did not attend the VMA’s and I bet everyone’s wondering if he knew anything about this.

Check out Will Smith’s priceless reaction to Miley’s performance! 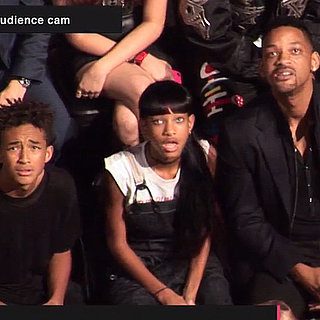 This is yet another former Disney child star gone AWOL. Remember Britney spears and her raunchy make out session with Madonna at the 2003 VMA’s?

Later on, comedian Kevin Hart joked about Miley Cyrus as he warned the other younger gals-Taylor Swift and Selena Gomez.

“You better stay away from Robin unless you want to be on the amber alert’ he said.

What are thoughts on Miley’s performance?

No VMA is ever complete without a little Taylor Swift drama.

The country superstar was caught mouthing off a”shut the F up” as her ex (Harry Styles), from One Direction, received cheers from the crowd.

HERE is the funny moment.

Later, she thanked him for inspiring her to write yet another break up song as she collected her award for best female video.

Her best friend, Selena Gomez,  picked up the first award of the night for best pop video with her song come and get it.

The duo also won the award for best video with a social message for “Same Love” which they later performed.

Another serious moment from the night occurred as Gay rights took center stage.

Basketball player, Jason Collins presented and talked about his decision to come out.

Justin Timberlake ruled the night with a medley of his Greatest hits(check out the video below) and then briefly reunited with Nsync as they performed to “Girlfriend and Bye Bye Bye”.

Nsync fans danced and cheered on as the 90’s boy band rocked the crowd. Watch the Video Here! What did you think of their reunion?

Justin Timberlake accepted the 2013 Michael Jackson Vanguard award and also triumphed with Video of the Year for the song “Mirrors”…..which he dedicated to his Grannie.

Another boy band, One Direction, received an unusual reaction from fans as they collected their award for best song of the summer.

They got booed by the crowd as they accepted their award.  Pop Star Lady Gaga wasn’t too pleased about it as she threatened to leave the show.

Sorry One Direction fans, I’d have to side with the crowd on this one. Dare I say Robin Thicke deserved it for the song “Blurred Lines”?

Overall the performances were amazing.

What was your favorite moment from last night’s MTV VMA show?

Let me know in your comments below.

Also, if you missed the show, you can watch it HERE, on mtv.com. The show will be rebroadcasted on TV several times this week.  For show times click Here.