Kit Walker (Evan Peters) aka Bloody Face... but nothing as it seems in Briarcliff.

The opening scene shows fans the present day Briarcliff in ruins, as two honeymooners trespass it’s doors to explore the asylum while reading it’s history off a smart phone.

Briarcliff’s description sounds familiarly like the story of another asylum, Waverley Hills Sanitarium.The atmosphere is spooky, but not so scary which is misleading as the episode unfolds.

Well fans, meet Sister Jude (Jessica Lange), who is the nun in charge of running the asylum. Viewers watch as Lana Winters (Sarah Paulson), a reporter, visits Briarcliff for an interview on mental illness.

But Lana wants the bigger story of the serial killer known as “Bloody Face” and she’s intent on getting that story. Sister Jude believes mental illness is made up. “Mental illness is the fashionable explaination for sin.” Sister Jude to Lana Winters.

Lana’s snoopy ways lead to her ending up a patient herself. 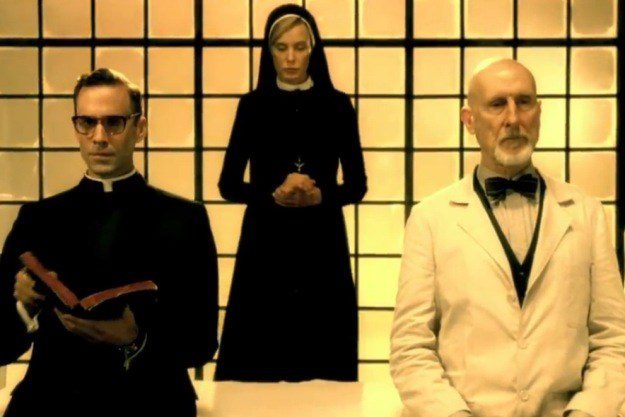 Sister Jude explains the church’s work at the asylum is to give patients the chance to repent. She explains that Monsignor Timothy Howard (Joseph Fiennes) is the mastermind of the theories to cleansing the patients’ souls. The Monsignor seems to be one of the innocent ones in the asylum. In Sister Jude’s eyes the Monsignor can do no wrong and she runs the asylum based on his theories of penance. Our pious nun-in-charge seems to have an infatuation with the Monsignor that goes beyond Godly.

Meanwhile, in the present, our happy honeymooners Leo ( Adam Levine) and Teresa (Jenna Dewan-Tatum), are having a not so happy moment, as Leo is attacked and too severely hurt to help himself. Who attacked? The couple is not sure, but they think it’s the serial killer known as “Bloody Face”. Teresa tries to get Leo out of the building, but someone has chained the doors shut.

In the past, Kit Walker (Evans Peters) is accused of being “Bloody Face” and is court ordered to stay at Briarcliff until he is examined to be mentally fit for a trial. Except is he? His story is intertwined with an alien abduction and a forbidden inter-racial marriage. Kit seems to have a possible ally in Grace (Lizzy Brocheré), another patient who tests Sister Jude’s patience.

In a place as foreboding and insane (excuse the pun) as Briarcliff, there are no shortages on the horrors and horrible people involved. Dr. Arthur Arden (James Crowell), nemesis to Sister Jude, seems to have his own horror in store for the patients. Dr. Arden takes special interest in Kit Walker, and has him taken to his mad scientist lab on the down-low.

Sister Jude knows that Dr. Arden is up to something, but the doctor has the protection of the Monsignor. He has no fear of her as others do. Sister Jude walks in on Dr. Arden scrubbing down a supposedly long closed up room.Fans are left to wonder more on Dr. Arden’s involvement in the asylum.

The story-lines start out separately, but all involved will eventually end up in the same place and facing the same evil in order to make it out of Briarcliff Asylum. The odds of making it out alive seem slim.

Season one of American Horror story is available through Amazon Instant Video and Itunes.