People who read books on eReaders read more books in a year than people who don’t use eReaders, according to a new study.

The study was done by the research firm Harris Interactive, as part of their well-known Harris Poll. 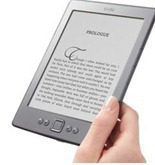 That averages out to about 75% of those using eReaders reading six or more books in a year.

Of course, common sense dictates that avid readers are more likely to purchase and use an eReader that those than don’t read much.

What would be interesting is if the study indicated whether there was an increase or decrease in the number of books read after someone purchases in eReader. We can speculate it would increase, but that’s only speculation. The study, or at least the parts they have released so far, didn’t cover that.

The study also found that eReader ownership is increasing. During the summer of 2011, 15% of Americans said they used an eReader. Just seven months later, that number has doubled to nearly 30%.

However, it was also interesting to note that the number of people who say they plan to purchase an eReader within the next six months has ticked down a few percentage points. In the summer 15% planned on purchasing an eReader, seven months later it was down to 13%.

It could be that as tablet prices decline, shoppers may be more interested in more full-featured devices that include an eReader app, over getting a dedicated eReader only device.