How I Met Your Mother S8 Premiere: Clever, Funny, Touching 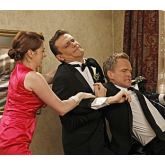 The highly anticipated Season 8 premiere of How I Met Your Mother was “Legen…” wait for it… “Dary.”

As we are still piecing together the identity of Ted’s wife, the season opener brilliantly weaved in more clues as to where he met her.

The episode starts off  “a little ways down the road” with a sneak peek of  Ted easing the nerves of Barney and Robin, moments before their shocking wedding.  We then take an eventful ride back with the gang to May, 2012.

Lily and Marshall just had baby Marvin and are both completely delirious, as they are getting no sleep. Their lack of sleep causes them to accidentally reveal to Quinn that Barney used to date Robin. And further, they miss Robin telling them that she is now dating Nick.

Jumping right back into May 2012, we find Ted insisting on Victoria leaving a note for Klaus as a form of courtesy and ultimately providing him with closure. An “awww” moment is created in this scene as Ted expresses his guilt in stealing her away from Klaus, to which Victoria replies: “You’re not stealing me, I’m choosing you.” She then begs Ted to deliver her break-up note, which after a few comical complications, he succeeds.

As Ted goes to retrieve his missing keys, he bumps into Klaus, who also appears to be the runaway groom of the wedding.

Ted then conjures up a clever plan where he would get rid of Vicotria’s note so that it would only appear as though Klaus is guilty of calling off the wedding.  After completing this mission, he stops by the train station and asks why Klaus wouldn’t want to marry such a great girl.

His answer is what makes this episode so incredibly beautiful.

He explains that Victoria is not his “life long treasure of destiny.” He explains how she is almost what he wanted, but not quite. Ted further questions how you know when you have found the one to which Klaus states: “It doesn’t develop overtime. It happens instantaneously. It courses through you. You feel it throughout your body, in your hands, in your heart, in your stomach, in your skin. Everyone finds it, you just never know when or where.”

As this is being said, we see Robin looking through Barney’s storage, which consists of a memorabilia of Barney and Robin’s relationship. We then see Barney looking out the window of a cab with an unsure look on his face as Quinn sits beside him.

This episode was a great opening to the beginning of Season 8, as we continue to delve more and more into Ted and the gang’s journey.

The greatest thing about How I Met Your Mother is not only how cleverly and seamlessly the story of Ted finding his soul mate is told, but also how each episode has a profoundly heart-felt and deep message to deliver – this one being able to identify one’s “life long treasure.”

Leave your thoughts about the show below!

As a graduate of the University of Oregon, Berenice finally realized that her passion is to thoroughly entertain and inform through her writing. She loves offering her unique perspective on all things entertainment as a NFS contributor. On the side, she enjoys updating her blog: TenaciousTwin. Follow her on twitter @BereniceFamili