“I Just Want My Pants Back” Targeted By PTC

The Parents Television Council (PTC) is launching what they call an “aggressive campaign” against the new MTV show “I Just Want My Pants Back”.

The show, which premiered February 2, is rated TV-14. In its short run so far, the PTC says the show has included scenes that portray a prelude to a foursome and … well, other things that are not appropriate to describe here at CP. But the full statement from the PTC 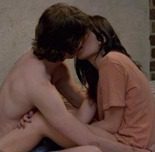 can be read here if you would like. Though rated TV-14, the PTC claims that David Janollari, Head of Programming at MTV, has said they are targeting children as young as 12 with the show.

“Once again MTV is taking HBO-style content and marketing it to a Nickelodeon-age audience. The network programming executive is on the record saying 12-year-olds are in his crosshairs. And the TV-14 content rating is intentionally misleading for parents and for advertisers. The Parents Television Council will not sit silently and allow this affront to go unchallenged,” said PTC President Tim Winter. “Parents need to be warned about MTV’s stated intention to target children as young as 12 with this explicit material.”

PTC said they are reaching out to the TV Parental Guidelines Monitoring Board with a request to review the show, but that “the mystery Board has done next to nothing except cancel meetings and avoid any possible public awareness of its existence.”

While the show originally airs at 11pm (EST) on Thursdays, re-airs will be run during the day with the more racy parts edited out.

The PTC identifies Dr. Pepper, T-Mobile and Toyota as sponsors of the show, and in the statement released by the PTC, Winter asks these companies if such “raunchy content” is an “accurate reflection of their hard-earned corporate brands?”