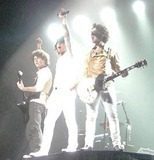 The Jonas Brothers, a sibling band comprised of Nick, Kevin, and Joe Jonas, has left their former Disney label, Hollywood Records, and gone their own way.

Nick Jonas told the Hollywood Reporter “This was a decision that we made as a group… We’ve been blessed to have a lot of success with Hollywood and with Disney, but speaking on behalf of my brothers and our team, we’re all looking forward to this next chapter. We’re ready for that next step as a group, and being able to take our work with us was so important.”

But what that new destiny may entail is unknown at this point. “There’s no plan here — the plan is whatever we decide to make it,” said Wright. He did add that he expects the group will have a new album out by late 2012 or early 2013.