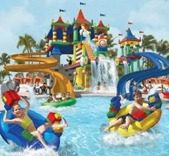 Legoland Florida is putting the finishing touches on their new waterpark, which is set to open on May 26. According to LegoLand, it took more than a half-million gallons of water to fill the new wave pool. The water was delivered via the LegoLand City Volunteer Fire Department.

The waterpark section of LegoLand will include a 1000 foot long ‘Lazy River’ where visitors will be able to build their own flotation device out of oversized, buoyant, Lego bricks and pieces, and ride along with the slow-moving current.

There’s also a 375-foot pair of enclosed water slides, an interactive playground with smaller water slides, cannons, a wading pool, and a toddler area called the DUPLO Splash Safari. Some parts of the waterpark are still under construction.