Dr. Seuss’ The Lorax was released in theaters today.

The film is based on a children’s book with the same name, and the release was timed to coincide with Dr. Seuss’ birthday. The writer, who died in 1991, was born 108 years ago today.

The Lorax is the first Dr. Seuss-based film in 3-D. The story evolves around a young boy who lives in a completely artificial world. His adventure begins when he tries to find a real tree to impress a girl. As an aside, it’s interesting to note that the young boy’s name is Theodor Seuss Geisel (voiced by Zax Efron). That is Dr. Seuss’ real 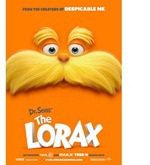 name. The girl of his affection is named Audrey (voiced by Taylor Swift), which was the name of Dr. Seuss’ real-life (2nd) wife.

The film has not gone over well with critics. Over at Rottentomatoes.com, the movie currently has a rating of 57% with 77 reviews so far. Regular viewers liked it quite a bit more, Rotten Tomato users (as opposed to ‘approved critics’) have rated the film 81%, with over 12,000 user ratings.

One of the main criticisms of the movie has been its heavy-handed environmentalist message. The message itself is not a surprise, the original Dr. Seuss book is written with an anti-consumerism theme. Movie critic Charlie Jane Anders of io9.com wrote of the movie “I’m pretty darn liberal, and I still wanted this movie to shut up and stop lecturing me.” Anders continues “People should just rent Wall-E instead. Seriously, If you want a fun animated romp with a message about saving the environment and some anti-corporate satire… rent Wall-E. Everything The Lorax fails to do,Wall-E already pulled off.”

The movie is rated PG for “for brief mild language.”