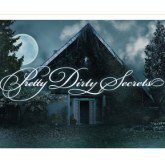 The next episode to air, titled “This Is a Dark Ride,” is currently scheduled for October 23. But ABC is offering up some tantalizing tidbits for those that can’t survive a whole two months without “Pretty Little Liars.”

On Tuesdays, ABC will feature webisodes based on the series.  The webisode series is called “Pretty Dirty Secrets.” The individual shows are agonizingly short. The first one, which can be seen below, is just over a minute.  In it, we get a look at the shop, then the phone is ringing. We hear “A,” who simply says  “I am calling to check on my costume, it’s under the name…. beeeeeep!” Oh, out of time, end of message.

There will be 8 webisodes in all, according to ABC. They have not announced what time the videos will be appearing on their site, so on Tuesdays we just have to keep checking.

ABC has not said exactly when the second part of season 3 will start. Online speculation is that it will premier sometime in early 2012, perhaps even January.

Amazon and iTunes both have current season 3 episodes available through their streaming services, and the summertime finally shown on TV earlier this week, “The Lady Killer” is currently streaming free at ABCFamily.com. The first two seasons of the show are available through Amazon, iTunes, Netflix, and on DVD at major retailers.

What do you think of this first installment of “Pretty Dirty Secrets?” Leave your comments below!