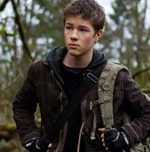 Ok, maybe not exactly the Replicators of StarGate fame – those little mechanical spidery things that could work their way through metal and just about everything else you could put in their way and attacked in hoards – but the similarity is stunning and perhaps not an accident.

On the Falling Skies after show 2nd Watch, the little buggers are referred to as ‘Crawlies.’ Bradley Thomson, the co-executive producer of Falling Skies, joked during the after show, saying each of the Crawlies has a name. ‘Bob’, ‘Kevin’, and ‘Will’ were some of the names mentioned, the last being a dig at 2nd Watch host Wil Wheaton (yep, Wesley Crusher from Star Trek, aren’t all these sci-fi stars one big happy bunch!).

During 2nd Watch, it was revealed that the idea for the Crawlies came from Steven Spielberg, who’s an executive producer for the show.

Ok, lets get into a bit of tonight’s episode, “Molon Labe.”

The Crawlies, while looking like mechanical Replicators, are actually biological. They can be squished, though apparently with some difficulty. Despite the coolness of the Crawlies, they really played a side story in this episode.  Ok, they did kill Jamil. But other than that, a side story, in a very busy story overall. What their relationship is with the other aliens is unclear. Perhaps they were simply stowaways aboard the spaceships? Much like the invasive species which have populated our present-day waterways by hitching rides on cargo ships. We’ll learn more in good time. no doubt.

Hmmm, remember a few episodes back when one character said he missed the chirping of crickets? That was rather an odd statement and stood out at the time.

Could the Crawlies have anything to do that? The little buggers must be eating ’em!

“Molon Labe” was an intense, and spooky, episode. Besides the Crawlies, we had humans up close with the Overlord Fishhead (Karen’s master), who, after speaking through Ben, and then giving him seizures, was shot and left bleeding on the floor. It was encouraging to see he was just as vulnerable and frail as humans are when not surrounded by Skitters and Mechs.

Ben hoofed off on his own, with Karen, at the end of last week’s episode. We got a replay of that tonight – sans Karen. And this time it appears to be for the right reasons. Of course, if he is leaving to stop the Fishheads from continuing their pursuit of the 2nd Mass. he’s going to have to let the aliens know he’s not with them any more…. argh, details.

And now the 2nd Mass is on their way to Charleston, where the pilot Avery Churchill told Weaver that salvation and civilization lies in wait.

TNT has a Falling Skies marathon scheduled for next Sunday. It starts at 2pm ET with the 1st episode of season 2, and continues through episode 4 until 6pm. Then episode 5 picks up at 9pm and the marathon continues until episode 7 (the one we are on now) is over at 12 midnight.

Oh – and just what does “Molon labe” mean? We looked it up – it’s ancient Greek for ‘Come and take them,’ according to Wikipedia.

So what do you think of tonight’s episode? Leave your comments below.