Shopping Addiction To Be Premise Of New Show On Oxygen 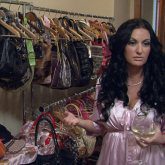 A third of US adults say they know someone who is addicting to shopping.

But apparently there’s a disconnect. Only 6% of Americans admit to having a bad shopping habit, according to a study conducted by Research Now for Oxygen Media.

Oxygen’s new series My Shopping Addiction will take viewers into the homes of people who can’t stop buying, even though they’ve maxed out both their credit cards and room in their closets.

In the premiere episode, which airs Monday, October 15, you’ll meet a woman who borrows money from friends for her dollar store shopping sprees, and another who turned compulsive when she came into a large inheritance. On hand, are two psychologists who will try to help the women get to the root of their problems so they can stop the destructive behavior once and for all.

As a lead up to the series premiere, Oxygen conducted a shopping addiction survey. The study revealed that 60% of people love shopping because it feels good, but they don’t always make good buying decisions.

· 68 percent have bought something strictly because it was cheap

· 58 percent have bought something expensive they didn’t need

· 48 percent have bought something and when they got home, weren’t sure why they bought it

· 38 percent have hidden a purchase from friends or family

In order to feed their habit:

Though most compulsive shoppers are women, they buy differently, tending to pick up smaller items such as clothing and make-up, where men splurge on big ticket items.

Psychologist Dr. Ramani Durvasula says that for most people, the key is mindfulness. He advises shoppers to stop and think before they buy. For the deeply addicted, breaking the shopping habit will be a lot more difficult, said Durvasula.

My Shopping Addiction premieres Monday, October 15 at 11 pm on Oxygen.

A question for our readers: is basing TV shows on people’s psychological problems fair game or over the line? Let us know what you think in the comments below.