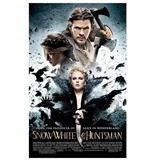 Ok, let’s take that back, don’t worry about reading the reveals, on this or any site. There just wasn’t anything in the storyline that was that suspenseful, that intense, that knowing anything about it would ruin it.

It’s not that Snow White & The Huntsman is a bad movie. It was actually very enjoyable to watch. The imagery was fantastic. Beautiful at times. Sweeping and dramatic. When it comes to eye candy, we get a full palate, from dark and sinister to light and fantasy-like.

But from there on, the movie goes into the ‘ok’ zone. The storyline is predictable. Ok – of course it’s predictable. We know it, our parents knew it, our grandparents knew it… But we expected some kind of ‘wow’ twist to the story, something brilliant and different, but it just never occurred.

Yes, that Snow White came back leading an army was different (we all already knew she would from the previews though, so not a surprise). A great story would have been how she became a warrior. How she learned resolve and grit. How she became a leader who could inspire and lead men into a battle in which the odds were against them.

But instead, the power to lead men just magically appears. She doesn’t learn how to fight, to inspire, to lead. It just happens.

And the scene in which it happens is slow and drawn out. There would have been plenty of time to intersperse images of intense training and hard work along with the fairy/fantasy granting of her divine strength. That would have meshed the fairy tale with the real life experience that grown ups know Snow White would have needed before leading her army into a battle for the kingdom. That’s what we were looking for in a more adult retelling of this famous story. Something to give the fairy tale some strength and plausibility.

But again, don’t take this review as a reason not to see the movie. It is fun, enjoyable, a pleasant way to spend two hours. And Charlize Theron, as the evil queen, is a treat no one should miss.

It’s just that the movie had the potential to be so much better.

Let’s boil it down:

– The great: Theron as the evil queen. The Troll! The cinematography!

– The bad: The lack of a compelling, captivating, storyline.

Have you seen the movie? Leave your thoughts below!