Snow White To Make 2nd 2012 Appearance In Theaters This Friday 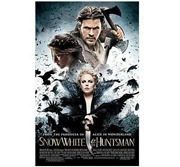 Snow White is coming back for her second round in theaters this year. But this isn’t the widely panned, mostly kid friendly, version that hit theaters two months ago. This one is for grown ups.

Snow White’s first foray into theaters this year, “Mirror, Mirror” (we’re taking about the kid friendly one here), was released on March 30. It starred Lily Collins as Snow White, and Julia Roberts as the Queen. It has received only a 51% ‘liked it’ rating from movie goers over at RottenTomatoes.com… and just a 50% ‘freshness’ rating from critics. My 9 year old movie loving daughter saw it with a friend and said it was ‘good,’ but hasn’t mentioned it since. Hmmm.

From what we can tell about the new movie so far, “Snow White and the Huntsman” appears to be a totally different animal. The film is described as a much darker take on the fairy tale. Snow White is no damsel in distress in this flick, at least not for long. The Huntsman sent to track down and kill the princess instead schools her in the art of war. In this version, Snow White returns to the kingdom as a warrior princess (a fact not overlooked by the Xena fans around here).

To date, RottenTomatoes only has six reviews from critics, but they are running very positive, with an 83% ‘freshness’ rating. Of course, regular movie goers won’t have a chance to see the film until Friday, but it looks like the show will get a good early bump at the box office – with 125,000 votes cast, 90% rate “Snow White and the Huntsman” a ‘want to see.’

An official trailer of “Snow White and the Huntsman” is below. We’ll be headed to the theater on Friday to see it debut, will you? Leave your comments below:

Yes, me and my husband are headed on a date night to see this on Friday – can’t wait, it looks great!