This Sunday Target will launch a new designer collection, Jason Wu for Target.

Do you remember the last designer launch Target had? It was Missoni for Target – and it was popular. So popular that fights were reported in stores and Target’s (new, at the time) website failed under the intense traffic load. 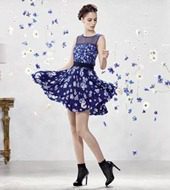 Jason Wu for Target may cause a rush as well. Some items have already, somehow, made it to eBay. About 21 of them at press time, all with premium pricing.

Chances are, Target will be more prepared this time. On the website side of things: Target fired the president of their online division after their site crashed during the Missoni launch and continued to fail way to often, even after the rush was done. Over time it has become more stable, even surviving Black Friday traffic last November.

As for the actual stores – Target is managing this launch differently. Unlike the Missoni for Target launch, this one won’t be available at all stores. A list of what stores Jason Wu For Target styles will be available in is listed on Target’s Jason Wu For Target Facebook page. There are also fewer items in the Jason Wu line. Where Missoni included about 400 items, from apparel to home furnishings, Jason Wu will only have about 40 items, mostly woman’s apparel and accessories.

We’ll be following the Jason Wu For Target launch here at CP on Sunday. Watch for a report concerning the event Sunday afternoon.