If ever there was a film that has managed to create controversy over the past 4 years, it would be The Twilight Saga.

The film franchise based off the popular novel series has split audiences down the middle, with fans adoring the films, while moviegoers receive mind grains from the franchise.

Now, at long last, the series finally meets its end with The Twilight Saga: Breaking Dawn Part 2.  The fifth film in the series sees the end of the 4 year saga, but does the second half to Breaking Dawn have what it takes to be considered a finale?

Breaking Dawn Part 2 takes place where the first one left off. Bella is at long last a fully fledged Vampire.  As she adapts to her new lifestyle, she hopes to spend eternity with her true love, Edward, and her daughter Renesmee. However, forever may not be very long, because the Volturi have heard of Bella and Edward’s daughter and make a move to fix the situation.

To challenge the impending threat, the Cullens must band other clans of vampires together to protect Renesmee. The vampires, along with the werewolves, must join forces to challenge the Volturi to one final showdown.

Unlike the plot to Breaking Dawn Part 1, the second half’s story moves along fairly quickly. Unfortunately, the story’s pacing is not to its advantage, as the end comes around before you know it.  In the case of a series finale, one would expect to see things coming full circle; but in the case of Breaking Dawn Part 2, the filmmakers may as well have ended the story in the first half.

Since Twilight started, the characters have been nothing but trouble. The development has been none existent, and performances have ranged from dull to being intolerable.

At this point, everything else in this saga is practically circumstantial. From effects to the humor behind the film, everything has felt effective in the eyes of this reviewer.

The one thing to look forward to in this film is the final battle. The big action sequence is probably the best thing this film series has ever done. It is not amazing, but the filmmakers were able to pull something off. That is until you reach the end of sequence when you discover that the scene is as anti-climatic as the moment from the book.  When you think that the filmmakers were actually going to pull something off, they dash your hopes and dreams at the very last minute.

When putting both parts of Breaking Dawn together, the stories do not mix well, and over all, this is not a finale worth the price of admission.  Since 2008, The Twilight Saga has been nothing to cheer about, and it seems only fitting that the series would  end in such anti-climatic fashion.

I give it two hats. 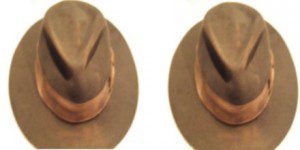